At the Zhuhai Airshow which kicked off on Tuesday, the new Chinese model COMAC closed the sale of 300 C919 and 30 ARJ21 jets to several lessors, according to Yicai Global news agency.

The two Chinese commercial jets are on display at the country’s biggest aerospace event, which takes place this year after being canceled in 2021 due to the Covid-19 pandemic.

Just weeks ago, the 168-seat aircraft received the type certificate from CAAC, China’s civil aviation authority, paving the way for the first production C919 to be delivered to China Eastern Airlines in December. 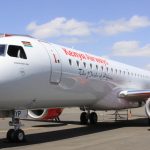