Rolls-Royce has officially opened Testbed 80, the world’s largest and smartest indoor aerospace testbed at a ceremony in Derby, UK.

The completion of the project is a major milestone after almost three years of construction and a £90m investment. With an internal area of 7,500m2, making it larger than a Premiership football pitch, Testbed 80 was designed with distinctive technologies and systems which are more capable and complex than any of our other testbeds. The testbed conducted its first run on a Rolls-Royce Trent XWB engine at the test facility in Derby, UK earlier this year.

Warren East, Chief Executive, Rolls-Royce, said: “Testbed 80 is the largest facility of its type in the world. However, it is not only big, it is also smart and features the most advanced testing technology we have ever used. As the new global hub of our testing capability, it will support the next stage of our UltraFan programme as we begin ground testing the first demonstrator in 2022. This incredible piece of infrastructure is a very visible sign of our commitment to this site and secures the future of Derby as the home of large engine development, continuing a history that began in the late 1960s with the RB211.”

The facility has been designed to test a range of today’s engines, including the Trent XWB and the Trent 1000, but will also have the capability to test the UltraFan® demonstrator, the blueprint for Rolls Royce’s next generation of engines. UltraFan will be 25% more efficient than the first Trent engine, and Rolls Royce will begin ground testing the demonstrator at the testbed in 2022. 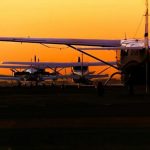